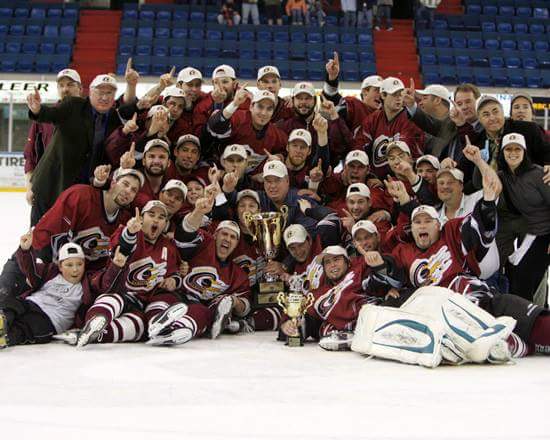 When it comes to hockey, the city of Cornwall has been blessed with many competitive and championship winning teams. From the 70s and 80s Memorial Cup wins of the Cornwall Royals, to the Robert W Clarke trophy (Western conference champions) winning squads of the Cornwall Aces in the 90s. Rounding out the decade with a few Bogart Cups and one Fred Page Cup for the Cornwall Colts, the city’s championship swagger was slowly coming to an end.

A few decades of powerful junior and professional hockey seemed like it was closing a chapter on the little border town but a strange new team in a strange new league popped up. Without a senior professional team for over a decade, it seemed that once again the city was now alive with championship dreams.

The Quebec Senior AA Hockey League was filled with legendary tales. Acting as what one would call a “farm league” to the LNAH, the QSAAHL was just as swift with their on ice brutality; if not, worse. Billing enforcers on teams like they would a boxing match, fans came out in droves to be able to witness some of the antics and fisticuffs that would take place. It was never about the skill.

In Ontario the league had a mystique about it. Remember, this was just before YouTube got started so there wasn’t video clip upon video clip being thrown at you on the internet. If you wanted to know exactly what kind of things happened in this league and if the rumors were true, you’d have to see it in person. 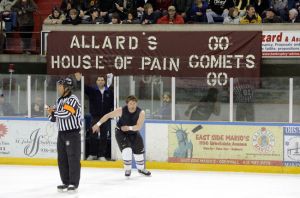 In 2004, the league granted Cornwall a team. Choosing the Comets as their rallying cry, the brass iced a squad that would show no mercy. Patrick Allard had 45 fights that first year and as the team played throughout the season, fans knew they were witnessing something crazy yet something to have hope for. Since the city was dealing with the loss of thousands of jobs due to the closure of Domtar, the Comets, albeit in a brutal league, was a breath of fresh air and something to get the residents mind off of what was happening around them.

The next year saw the Comets really take a chance at winning a championship seriously. At the end of the season, Allard was right back up there again with 58 fights. Following him was Paul Shantz with 44, L.P. Charbonneau with 36, Benoit Deschamps with 30 and Simon Desormeaux with 26.

“Yeah, I knew what this league was about.” remembers Corey Payment. “I played briefly in the old LNAH in Lasalle and Verdun. “ Payment was no stranger to the antics of hockey but more importantly preferred playing at home. Having spent a year in the United Hockey League with the Mohawk Valley Prowlers then two more after that in the Central league, coming home and playing in front of hometown friends and family made it all worthwhile.

“Our team was just so physical. With Desormeaux, Mathieu Raby, Jean-Rene Forget, Ken McCleod. It was incredible.”

However, none of these players or even the winning season would have been possible with the leadership at the top. “I don’t think enough credit went to our owner Dan Larocque. He came in and stabilized ownership. He made sure all the players were happy which in turn made playing for him easy. He was the best owner I ever played for. “

In the same breath, the passionate fan base the Comets had was what kept the players going week after week. That championship was just as much for them as it was for the players. “In the final there were two games that we played on the road in St. Jean,” recalls Payment. “The fans followed us to both games and filled their own section in the arena. It was amazing.”

That was nothing compared to at home.

“3000 fans watching us win that trophy was amazing. We wanted to win for them.” Being a Cornwall boy, this win holds a special place in Payment’s heart. “It was my first championship win in hockey and to be able to do it in my hometown in front of family and friends was a great experience I won’t forget.”

The Cornwall Comets may just be a blip on the hockey radar of what was already a solid hockey town. However for the brief two seasons they were here, it helped instill the fact that yes, Cornwall can still support professional hockey. Where cities are dying for a team of some kind across the country, we’re lucky that we’ve gotten to call so many great franchises ours. Let’s hope the championship winning ways someday continue.

The Cornwall River Kings are holding a 10 year anniversary of the Cornwall Comets championship this Saturday when they host Sorel. A pre-game ceremony with some of the Comets players on hand will precede the game. Make sure you get out to this historic night!