I don’t know why I decided to take on this topic. I’ve spent the better part of a couple weeks thinking about it. Maybe it’s because I’ve been researching mental illness a whole lot or maybe it’s because Theo Fleury’s biography is on my nightstand staring at me, begging to be read one more time. It could be the recent suicide of Slovakian player Miroslav Hlinka. Either way, I think it’s an important piece to look at.

Hockey is a tough sport. It’s one of the toughest sports (arguably the toughest) out there physically. Everyone can see that. Nobody ever thinks of how the sport can affect your brain. I’m not just talking about the fights where getting popped in the head a few times a night can obviously do damage. I’m talking about the hundreds of ups and downs one goes through their career. Not only on them but on their families as well.

Not everything in life is sunshine and rainbows especially in this sport. Don’t get me wrong, there has been progress made. Gone are the days of partying hard with the boys, breaking curfew and showing up to the ice still hammered. Instead we’ve replaced it for the most part with rigorous training schedules, perfect diets, and the always on the go lifestyle.

From the moment we see our kids lace up their skates for the first time, we expect the NHL dream. Some parents more than others jump into that dream with both feet and become an increasingly volatile whirlwind of mental anguish. I’ve seen parents get mad at their kids for not scoring more, not skating fast enough, not playing the body, telling them they’ll never make it and more. It’s bad enough that these kids will get reprimanded from their coaches but to take it from someone who supposedly loves them is hard on the ol’ self esteem.

Let’s say your kid shrugs off your words and hey, low and behold he actually has some talent. He gets drafted by a Major Junior team and the offers from NCAA teams in the United States come flooding in. All would be well and good if the stress of not knowing which route to take while dealing with full days of school, possibly a part time job and social life were easy. Don’t forget about the millions of people who will chime in to offer their advice. What do you do? Yes, there are counselors now who are ready, willing and able to help decide which path to take but you know what’s still sitting in the back of little Johnny Hockey’s mind eating at him? The fact that you told him he could never make it.

He’s not going to stand for that though! He’s going to prove you wrong! He decides to take the major junior route and play four solid years while hoping he trains hard enough, eats the right foods and does everything by the book to get onto an NHL team. His dilemma? Well, what happens if he doesn’t and you were right. That thought eats at him every single second of every hour. It starts to interfere with his play, so much so that Johnny Hockey has decided to turn himself into a little enforcer and start fighting in games to get his anger out.

Between games he starts to withdraw and isolate himself. Teammates notice but chalk it up to him just “being Johnny” or over exhaustion. Coaches notice and just shrug it off, telling him to just suck it up and get out there.

So now we’ve got a skillful, angry and depressed enforcer of a player. This wouldn’t be so bad if it were still the 80s/90s. The age of the enforcer is quickly dying in today’s game. Players are being taught more to use their skill and take on more of a role. How does this effect little Johnny Hockey? Well, the first round of the draft was promising when he first started. The rounds are coming and going. He’s finally taken in the last round to….it doesn’t even matter what team, it was the last round.

Of course, getting drafted to the NHL alone no matter what round is a great achievement. However not to our little Johnny. He feels that he’s now a failure and will never see the big time. Starts withdrawing more. Maybe he takes up drinking; maybe cocaine. He moves back to his hometown now that his junior career is over with nothing to fall back on. Spends his days in bed.

The phone rings. It’s a semi pro team willing to give him a shot. Happy days! Gladly accepting, little Johnny packs up his gear and heads out to his new team.

In middle of nowhere, Europe.

Okay, so it’s not THAT bad. He’s playing hockey for a living!

Yeah, that’s what you think.

The team promised him they were a professional organization. The team also promised him a bi-weekly wage. It’s been a month and he has still to see any of it. The team promised him a fully furnished apartment. It’s a table, stove, fridge and a mattress on the floor; going to have to fill in the rest yourself. His roommate however is another fellow import. At least he’ll have somebody to communicate in his own language with. Good luck with anybody else.

Little Johnny shakes his head but sucks it up. He’s a professional hockey player and damn it, at least he has that going for him.

The team promised him that they would travel by plane. 18 hour train rides later seem to contradict that fact. Well, at least he can rest on his off day. Good luck as the coach has scheduled a practice and oh look at that, you got a game that night.

Frustrated, little Johnny crosschecks the wrong European in the first period of his second professional game. Gloves get dropped and Mr. European catches Johnny with a left hook, sending Johnny to the ground head first knocking him out cold. Concussed, he skates off the ice and gets sent to the team doctor. Doctor thinks he’s alright to play even though he’s slurring his words and seeing double. Coach yells at him to take the next shift because after all they need this win. The coach’s job is on the line.

Johnny deals with this year in and year out. Plays everywhere from mainland Europe, to Midwest USA, to the UK, and finally ending in Quebec, Canada. He racks up the penalty minutes on his fight card not really caring about his point total because, what’s the point? It’s not like he’s going to make it back to the show. His wife, fed up with the constant travelling and seeing her husband get beaten to a bloody pulp every night, threatens divorce. Nobody remembers the talent he once possessed. Night in and night out he’s beaten and bruised up all the while thinking, “what am I even doing this for?”

Finally Johnny realizes he’s getting too old for this. He’s only 33 but his body feels like that of a 70 year old. He’s in the locker room one night thinking about hanging them up. He’s caught with sudden anxiety. What is he going to do after this?! He never went to college or never held a job for more than a few months. Hockey is all he knows; where does he turn?

This is where my story ends and my thinking began. Where do the minor, professional, semi-professional hockey players go when the game is gone? Yes, plenty turn to coaching, opening up hockey schools and whatnot but what if you’re not one of the lucky ones to do so? It’s a daunting and scary thought. You’ve lived out of a suitcase for 10-15 years of your life and you’ve most likely not saved very much. Where do you turn?

There’s not many resources there for the players when they leave the game. A lot don’t know what to do with themselves as it’s all they’ve ever known. It’s almost like a soldier in the military getting back to civilian life.

Now what about all of the medical injuries and diagnoses you’ve captured over the years? Most leagues don’t have a pension plan or medical coverage when you’re done with the game. It’s a very important piece to understanding the life of a semi-pro athlete and what they deal with once the glory fades. 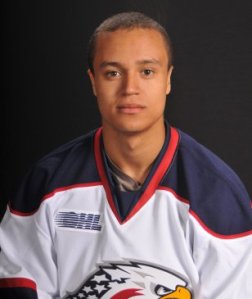 If I had the money, I would start up a foundation where players could go to help them with the transition of coming back into the real world so to speak. Just as there are some players who can’t handle not making it (see Terry Trafford), there’s some who can’t deal with never playing again. They need to be caught before something turns ugly.

Mental illness is a big topic in the life of a hockey player. Once things start to slow down and they take a step back to look at their life, that’s when everything comes spiralling out of control. I’ve read it in way too many player biographies. We’re getting better with the NHL’s Hockey Talks campaign but it needs to more than once a year. It’s important to know that it’s okay to ask for help.

I know this article was a long one. I just want people to think of the other story of the coin with our hockey heroes. They’re people just like us and some of them even live pay cheque to pay cheque just like you. They’re not as different as you think.

READ: “The response to The Dark Side of Hockey”

54 thoughts on “The Dark Side of Hockey: what people never think of”