Last Saturday night former Nottingham Panther Joe Grimaldi took to Twitter to air out his frustrations over the way he was treated by head coach Corey Nielson. Grimaldi accused Nielson of changing up his contract and badmouthing him to other clubs therefore ruining his chances of landing on another team. These tweets have since been deleted and Grimaldi has of course cited the age old excuse of being “hacked” by keyboard warriors.

Anyway, whether or not what Grimaldi is confessing is true is another story. I don’t know enough about him, Nielson or the Nottingham Panthers to give you a firm opinion on the matter. That being said, I know that it’s not out of the ordinary for coaches, GMs and Owners to sabotage the players hopes. So I don’t doubt that there some truth to his accusations.

In many teams and leagues around the world, some owners and general managers look at their players as pawns if you will. You are nothing more than a number to them. Hell, a dollar sign even. You can easily be replaced as there are countless numbers of players just waiting to take your spot. I’ve heard similar stories to Grimaldi’s from other players in different countries first hand from the players themselves. They don’t look out for what’s best for the player. Case in point, Mike Danton.

I’ll spare you the details but Mike Danton was treated extremely horrible in the most insane conditions in Kazakhstan. Actually, you can read his blog post about it here. Even after speaking with the club’s brass about it, nothing changed. We are speaking about Kazakhstan though so this story might be on the more extreme side of things. On the other side of the coin, I’ve heard nothing but great things about the New Zealand Ice Hockey League and the Australian Ice Hockey League.

As early as junior, players are looked at as a viable income to several owners. (Don’t get me wrong here, I’m not lumping every single one in the same fashion. I can name quite a few who treat their players like royalty.) The perfect example of this is the tragic case of Terry Trafford. The Saginaw Spirit is growing a hardened reputation of not being a very reputable organization to head into.

As we get into the semi-pro ranks, the tide continues to grow. Promises are not promises; wages don’t get dealt out or they get held back. I’m not talking about clubs who can’t seem to afford to play their players (that’s a whole other topic) but one’s who outright refuse to pay their players.

Hockey as a profession is luck of the draw. It’s hit or miss. Unless you know how to weasel and sly your way around, you might want to do some research before you sign that “big pay cheque”.

Friend of the blog Terry Watt is having quite the year. He’s currently on his third team and third country in just 6 months. Little did he know that as a young Watt growing up in Ajax, Ontario, he would one day be taking his hockey talents to almost every part of the globe.

After spending most of his early career in the Federal Hockey League and Southern Professional Hockey League, Watt made the jump down under this past summer and made his debut in the New Zealand Ice Hockey League with the Canterbury Red Devils. With Defenseman of the Year honours and an NZIHL championship under his belt, the ice from France came calling.

However his adventures in France were short-lived as former Red Devils head coach Anatoli Khorozov saved him a spot with his new found team in Kazakhstan, Beibarys Atyrau. He now skates alongside Olympians and former NHlers. Not bad for a kid from Ajax. I caught up with him to see how his Kazak adventures are fairing out.

March Hockey: How different is it playing in an up and coming hockey country such as Kazakhstan?

Terry Watt: First of all, playing here is a tremendous honor. I’m a player that has been given a really good and rare opportunity to play with and against some elite hockey players. The hockey here is really fast and filled with lots of skill. To be able to practice and learn every day from guys who have played in the Olympics, NHL and KHL is a bit surreal for me considering almost a year ago I was playing Single A pro back in North America. One thing that is noticeably different is that everything we do here is monitored and written down. Every day at practice we all wear heart monitors and our recover time is noted in every situation we do. The big thing for me this year is to just be a sponge and absorb as much information and learn as much as I can from these guys and try and translate it into my game to hopefully become a better player moving forward.

March Hockey: This is your third team and third country this year. What are some of the differences and similarities between them, hockey wise?

Terry Watt: Playing here is like nothing I’ve ever experienced before. The hockey on and off the ice is very demanding. It is by far the hardest thing I’ve ever had to do physically and mentally. With the exception of myself, all the Canadians on my team have played in the NHL, AHL, ECHL and CHL – from what they tell me, playing here is very comparable to those leagues in many regards for the exception of the NHL . 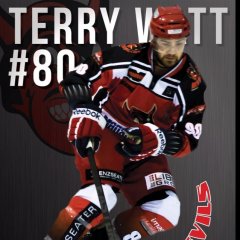 Each day we are usually at the rink for roughly 7-9 hrs. Some days we have two practices. When we aren’t practicing we are in the gym lifting or on the ice we are doing some type of aerobic workouts. Back in North America most pro teams practice in the mornings and then are done for the day; however some guys head to the gym for a work out, but after that their day is pretty much done. In Kazakhstan they take care of us pretty well. We have all our meals catered, and even at times brought to the rink so we don’t lose any time practicing or preparing for our next game. I’ve only been here for just under a month and I will be traveling with the team for the first time this week. We are going on a two week road trip where we will play 6 games all through the country. The guys tell me that they spend hours on planes and even some 36 hour train trips to games – so conditioning is going to play a huge role in me getting use to the Olympic size ice and intense travel schedule. These are just a few things that separate the difference in hockey here oppose to back in North America. The simple answer to your question is that this experience is something completely new to me.
END_OF_DOCUMENT_TOKEN_TO_BE_REPLACED