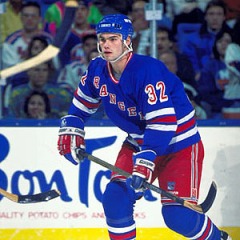 While the Aces of yesteryear seem to have taken place years ago, I often find myself searching for players who stuck out when I kid in the stands watching them. Players like Aaron Miller, Serge Roberge, and Rene Corbut just to name a few. However another player who was watch and an all too familiar name popped up on Twitter over the weekend.

Massena, New York native Mike Hurlbut played in the Frozen Frontier game in Rochester, New York which featured Buffalo Sabres alumni squaring off against Rochester Americans alumni. Hurlbut is an alumni of both teams but suited up for the Americans. As an added bonus, it was announced that he will be inducted to the Rochester Americans Hall of Fame, class of 2014.

After a successful collegiate career with St. Lawrence University, Hurlbut was drafted by the New York Rangers in 1988. After bobbing around between both the NHL and AHL for a few teams, he found himself in the Seaway Valley suiting up for the Cornwall Aces for two seasons. He was a pivotal asset to the Aces in capturing two division titles.

Hurlbut retired in 2002 with 29 career NHL games under his belt with the New York Rangers, Quebec Nordiques and Buffalo Sabres.