We have had 2 weeks of games now in the EIHL and although teams are still finding their feet, one in particular has stood out, the Dundee Stars. 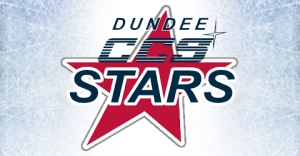 Usually one finds the Stars propping up the league but this year is another story altogether. In their first 4 games they have chalked up 4 wins. This itself is no mean feat but considering Dundee have half the budget of those they have beaten, (Sheffield, Coventry, Braehead and last years “grand slam” winners the Nottingham Panthers) necks are snapping to look at them as they skate by.

They are a team that stifles others really well and have a strong defensive core. Although they focus on protecting underrated netminder Dan Bakala, Dundee has defenceman Roy Rawlyk. In 4 games played, Rawlyk is tied for top points scorer on the team with 5 and has been extremely impressive at both ends of the ice. Bakala. also in 4 has posted a 1.75 with a .959 save percentage. Impressive for a goalie in only his 2nd year pro. Their offensive strength comes from counter attacking plays, often fed by a Rawlyk first pass. Incidentally Rawlyk won the Gardiner Conference player of the week last weekend. The Stars will almost certainly not finish the league without a loss or two, but they are certainly looking to upset Gardiner Conference favourites Braehead Clan and make a case for their first appearance in Nottingham at the playoff finals weekend.

Also getting praise from pundits are Adam Henrich and Ryan Ginand of the Coventry Blaze. Adam Henrich is one of only two imports the Blaze kept from last year (originally was 4 including Benn Olson, Mike Egener who misses this year through injury, and Mike Schutte who retired) and has continued in the vein of scoring that saw him post an impressive 13 goals in 14 games with 8 assists. He is currently 3+3 in 4. Then there is Ryan Ginand who combined with Adam Henrich are the best combination the Blaze have had since Adam Calder and Dan Carlson. Ginand has posted a whopping 7 goals from 4 games with 1 assist. Like Shea Guthrie, the Blaze are going to enjoy watching him but at the same time I wonder if they will struggle to keep hold of him. Goalie Mike Zacharias is starting to find form, although I criticized him for letting in a couple of softies during the first exhibition and league games, there was nothing soft about his 5-0 shutout in Belfast. The Blaze Defence has been criticised by many onlookers so far but with the addition of Michael Devin for next weekend, I am sure this will cement the Blaze blue line. Devin is sold as a solid 2way defenceman that uses his size, has a hard point shot and isn’t afraid to fight. His recommendations come both from Adam Henrich and former Belfast Giant Mike Hoffman. If Hoffman says you can fight, you can fight.

Fight Night in Nottingham and Cardiff

Speaking of fights, someone who is no stranger to a bit of the rough stuff is Nottingham star power forward Leigh Salters. He took care of business in preseason knocking down Stars captain Tysen Dowzak, (check out the fight here: http://instagram.com/p/eNjlUbiRqf/#) but has taken care of business more notably in the points column, going 2+7 in 4 games. He will be definitely one to watch and could provide the big, fighting, power forward with a scoring edge the Panthers have lacked since John Craighead left in 04-05.

Andrew Conboy meanwhile has spent more time in the penalty box than on the ice. Sitting a league high 54 pims in 4 games (13.5 per game) his teammate Andrew Lord however is delighting Devils fans, going 4+4 in 4games played. Speaking of fighters, this fight between young Brit Matt Selby and former AHL defenceman David Phillips is one Selby (probably not Phillips judging by his reaction) will remember for a while, winning his 3rd EIHL fight. At 2:20:

2 thoughts on “EIHL Round up: First Steps for the Dundee Stars, Coventry Blaze, Fight Night in Nottingham”