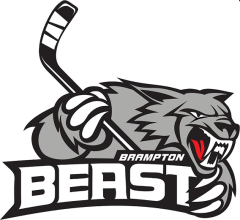 At long last I finally have a Central Hockey League I can call my own and cheer for! Let me introduce to you the newest squad to join the CHL, the Brampton Beast.

The CHL has finally found it’s way into the Canadian market with it’s expansion Beast. After consistently having financial trouble and struggling to put fans in the seats, the city’s OHL team, the Brampton Battalion, jumped shipped and moved to North Bay. Leaving the Powerade Center team less, the former owner of the Kingston Voyageurs and current president of KIMCO Steel in K-town, Gregg Rosen, immediately jumped on board with finding a way to bring a new franchise into Brampton.

Both the city and the CHL immediately gave their stamp of approval and the expansion team was born. Brampton held a name the team event with the two finalists being Bandits and the clear winner, Beast. Their roster is starting to take shape with already announcing 3 signing in the form of 3 Canadians, Brett Smith, Jason Pitton and Calin Wild. Smith was a former alternate captain with the Fort Wayne Komets and brings plenty of experience to the group. Pitton was a former draft pick of the New York Islanders and spent the majority of his career in the AHL.

The Beast are currently holding a guessing game through their Facebook and Twitter pages which allows fans to ask questions to guess who will be their AHL and NHL affiliates. Exciting times for the world of hockey in Brampton as they get a step up from the OHL.