In a somewhat boring news week for the NHL, it was awoken from its slumber in the form of New Jersey Devils superstar Ilya Kovalchuk announcing his retirement from the NHL.

I first saw the announcement from New Jersey Devils beat writer Tom Gulitti (@TGfireandice). When he followed up the announcement with “this is not a joke”, I knew it was for real. I then contacted my Devils source and sure enough, it was true.

Kovalchuk has indeed released a statement:

“This decision was something I have thought about for a long time going back to the lockout and spending the year in Russia. Though I decided to return this past season, Lou was aware of my desire to go back home and have my family there with me. The most difficult thing for me is to leave the New Jersey Devils, a great organization that I have a lot of respect for and our fans that have been great to me.”

Ilya Kovalchuk was drafted 1st overall in the 2001 entry draft (the first time for a Russian) to the Atlanta Trashers and remained a franchise player and superstar since the beginning of his NHL career. In his rookie season, he finished second in voting for the Calder Trophy, the NHL’s top prize for Rookie Of The Year. His second year saw him capture the Rocket Richard Trophy for leading the league in goals after tying with Jarome Iginla and Rick Nash. He also was tied for second in points with Joe Sakic.

During the 2005 lockout, Kovalchuk went home to Russia and suited up for both Ak Bars Kazan and Khimik Moscow Oblast. After finishing his contract with the Trashers, Kovalchuk was traded to the New Jersey Devils on February 4th, 2010 where he shined. On March 20th of 2012, he became the 87th player in NHL history to score 400 goals. Despite signing with SKA St. Petersburg during this past lockout, Kovalchuk remained with the Devils to finish out his career.

In 816 NHL games played, Kovalchuk has amassed an ASTONISHING 816 points. That’s right folks, a point a game. The NHL is losing one of it’s best players and one of the best Russian players to ever play the game. Along with that shining statistic, he owns an Olympic bronze medal, numerous gold, silver and bronze medals from World Championships and a gold and silver from his U18 days.

As for what this does to the Devils’ salary cap? Fact is, not much. His contract is void whenever the ink on his retirement papers dries. The Devils do not have to pay him although they will be forced to pay $250,000 vs the cap as a cap recapture penalty.

Kovalchuk is reporting that he is going back home to Russia. Could he suit up for a KHL team? It’s possible and only time will tell what his real motives are but for now, it’s time to mourn the loss of a great player. 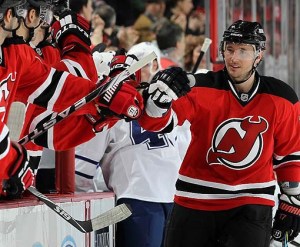