After a whirlwind trip to Kingston, Ontario, home of the great Dougie Gilmour, I am finally back on a computer to catch up with all this Free Agent action.

And boy, did I miss some insane GM deals.

Let’s start off with Tyler Bozak signing for 5 years in Toronto. At 4.2 million per year, Toronto thinks he’s a hockey player or something. Christ, that’s Vinny Lecavalier money. Buying out Grabo to sign Bozak to a longer deal will not be a wise move in the long run. Trust me. I’m not Randy Carlyle though. BUT, the Leafs also signed David Clarkson to 7 years at 5.25 million. That’s not a bad steal for the buds as Clarkson will definitely help them out, filling in for Grabo. I’m actually shaking my head at the buying out of Grabovski. I hope somebody is smart and picks him up and shoves it in Carlyle’s face.

Detroit pulled out a couple big punches stealing away 17 year Ottawa Senators vet, Daniel Alfredsson. Alfredsson signed a one year deal, likely to be his last. To me, all his Swedish buddies are there and I guess attempting a shot at a Cup with friends seems fitting to him. Loyalty means nothing anymore. They also picked up Stephen Weiss from Florida for 5 years at just under 5 million.

Columbus Blue Jackets landed Nathan Horton to 7 FREAKING YEARS. 7 years to a guy who has a known concussion problem AND is undergoing shoulder surgery so he won’t even be on the ice till sometime in December. I’d like to say that was a good signing but…..no, just no. 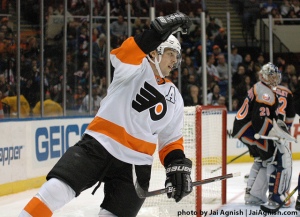 Danny Briere signed on with the Montreal Canadiens. I think he’ll fit in well there and he’ll help the team out. Briere has a couple more solid years left in him. The only thing that boggles my mind is why Montreal doesn’t try to get bigger. They’re so small, toughen yourselves up with a couple big guys. Wouldn’t hurt.

Boston seems to be going down the drain from their Cup run. They’ve already lost Horton to Columbus and traded away Tyler Seguin to Dallas. Andrew Ference is also on the move as he signed on with the Edmonton Oilers. Maybe they want to keep old man Jagr around for another year.
OTHER NOTABLE SIGNINGS SO FAR: