George Royle is a fellow hockey writer and a friend of mine who I met while writing at Blackout Dallas. A die hard hockey fan and native of the United Kingdom, George gives me his look at how he got into the hockey world and a look at the upcoming season for the Swindon Wildcats and the major changes that were made in Texas with the Stars.

March Hockey: Where are you located and how did you get into hockey?

I live in a county called Wiltshire, which is located in the South West of England and about 80 miles West of London. I got into hockey about 13 years ago when my dad took me to watch my local team play live. A short time after, I caught my first NHL game which was aired on television over here, and since then I haven’t looked back. Up to this day, hockey is my favourite sport and I play/watch the game as much as possible.

MH: What makes you a passionate fan of the Swindon Wildcats?

GR: With the Swindon Wildcats being just a 20 minute journey away, they are the closest (semi) professional ice hockey team to me. They play in the EPIHL which is a league I thoroughly enjoy watching. Any team has the capability of beating anyone, which makes the majority of games entertaining and competitive.

I watch all of the regular season home games every campaign as well as catching the odd road game now and again. With all of the games being played at the weekend, my weeks during the winter are spent looking forward to going to watch the Cats play!

MH:  Who’s a player on the team that stands out the most in your eyes? 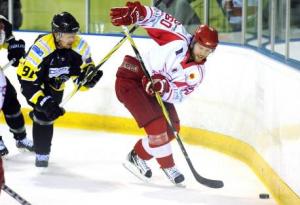 GR: Without a doubt it is the Swedish import, Jonas Hoog! This guy has a lot of talent and should undoubtedly be playing at a lot higher standard, but his loyalty to the Wildcats has been pretty admirable.

Last season he bagged 120 points in just 54 games. Jonas isn’t afraid to pull some tricks out of the bag and he always plays the game with a smile on his face. With his favourable surname, whenever he touches the puck the crowd all cheer an elongated “hoooooooooooooooooog”!! END_OF_DOCUMENT_TOKEN_TO_BE_REPLACED