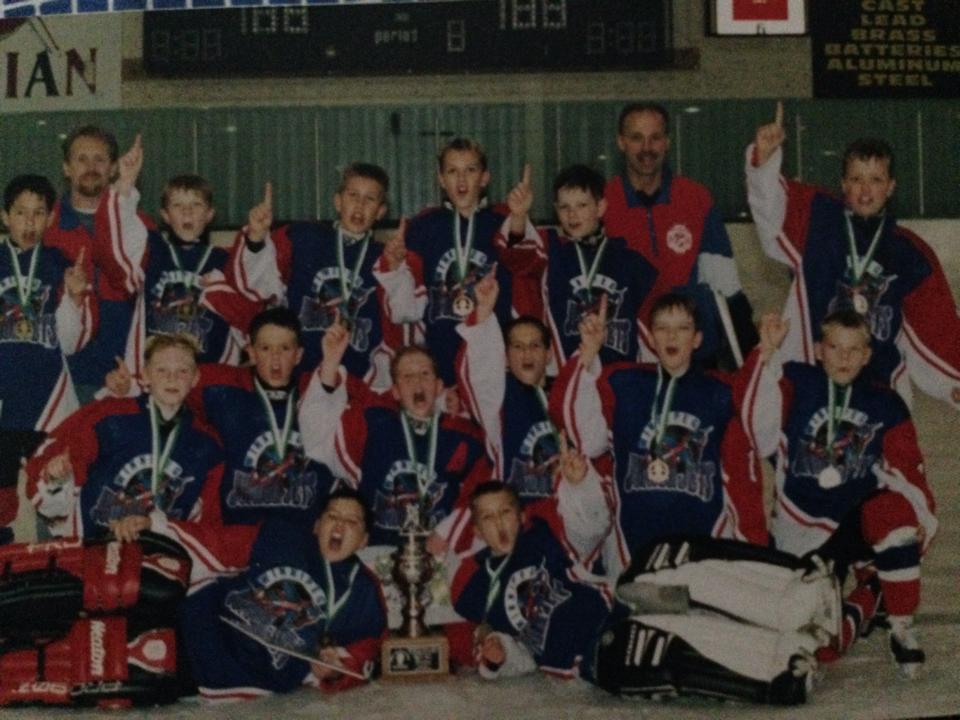 When my article on the “Dark Side of Hockey” first hit the powerful waves of the internet, Carson Shields was one of the first (if not, the first) players to reach out to me. His story has been very well told in his province of Manitoba and maybe there’s been a little coverage out west but in my neck of the woods of Eastern Canada, I knew that nobody had heard this tale. Right away I wanted to make him one of the first parts in my “Dark Side of Hockey” series. He sent me links upon links of different articles that tell his horrid tale of hazing. I couldn’t even manage to get through watching a video interview, that’s how bad it stung me. This needs to be read by every single person in sports.

As a young kid growing up in Winnipeg, Manitoba, Carson Shields was fascinated by the Canadian winter past-time of hockey. Just like any other young boy in the country his age he became enamoured with it and one day dreamed he’d be able to take it in at the highest level;  the NHL. Seeing something make their boy so happy prodded Shields’ parents to sign him up. He never looked back.

His early days in hockey saw him skate the ice with some of today’s powerhouses. Jonathan Toews and Frazer McLaren were both on his AA Assiniboine Park Rangers squad. By the time Shields reached his teens, his big frame had given him a bit of an enforcer label. Not in a bad way though. He was always the one who would stick up and be there for his teammates. A player that every guy would love to have on his line. The type that every coach would love to have on his team because he actually wanted to learn as much as he could about the game. His skills on the ice were good but not good enough for major junior. His junior career made him make eight different teams in four different provinces between junior A, B, and even C.

The dream of playing professional hockey was the fuel that kept him burning. He traveled so much his Dad (who earned Rookie of the Year honours in the Manitoba-Saskatchewan Junior Football League one  season)  gave him the nickname “Suitcase”. No matter, he was going to make it. 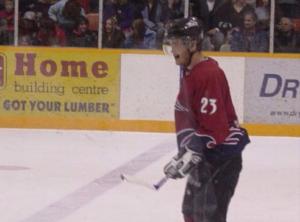 In his grade 10 year, Shields decided to try out for his high school team. Kelvin High School, out of Winnipeg, Manitoba saw Shields with growing leadership abilities. Along with his drive to play, he earned himself a spot on a team that was mostly made up of 11 and 12th graders.

As he progessed into a new year of junior hockey, Shields found himself as a rookie on a one team. The veterans introduced Shields to the glorious taste of alcohol, something that Shields would become close with in time. Part of the rookie experience on this team was to endure the dreaded hazing ritual then finally be considered one of the boys. Almost like a college fraternity, Shields and a few other rookies swallowed their pride and headed off with the vets to a house that was used for the team one weekend.

No coaches, no parents, nobody but young teenagers were at this so called party. Shields knew that because of his age and his playing abilities, it didn’t sit well with most of the vets on the team. After all, he was a 17 year old. That right there instilled fear to the veterans on the team. Shields could one day steal their job. As the new guy this was going to be their way of getting back at him.

To start off what I call “Hell Night”, the rookies were forced to strip naked in the street and were led to an area where they found six glasses of clear substances staring back at them. Five of them held alcohol, each a different kind. One was water. Once you found the water, you had beat the challenge. Seems simple enough right?

Well, these weren’t shot glasses. Shields went through glasses of vodka, white rum, Sambuca, and two others without finding water. Looking at the sixth one as his saviour, he swigged it down. Wasn’t water.

Of course, with that much alcohol downed in your system in such a short period of time, the rookies were intoxicated to the point of no return. Remember, they’re still all naked at this point. What they were forced to do next is something I don’t even want to type, so I’ll copy and paste it from an interview Shields did with the Globe and Mail. The rookies were forced to do the “elephant walk”.

“They were forced to do an “elephant walk” about the rooms: each rookie holding onto the testicles of the hunched-over rookie walking ahead of him”.

Once satisfied that the rookies had passed that test, they were fed even more alcohol. The veterans then shoved them all into a room upstairs where most of them were beginning to vomit. Not on the floor, but on each other. They were then forced to “bong” cans of beer. By this point Shields had blacked out. The last thing he remembers hearing were the words, “Alright!! You can bring the girls up from downstairs now!!”

Does he remember the night? He doesn’t have too. The veterans managed to whip out their cell phones and take pictures of the rookies in different humiliating poses. Some urinated on the group while documenting it. Who knows what those girls did to them. It’s these events that give Shields nightmares to this very day. Thankfully this was before the inventions of Facebook and Twitter.

After learning about what had happened to him, Shields contemplated packing it in and ending it all. How he continue with his life after being ultimately humiliated by people he thought had his back? To stuff the memories down, he became cocky and arrogant. His play on the ice dropped and he began using his fists more. Three more years of junior saw him ice 118 games (MMJHL, MJHL, SIJHL, Playoffs, Dudley Hewitt Cup) and capture 417 PIMS; that’s 27 fighting majors.

However, it wasn’t just the play on the ice that changed Shields. His whole demeanor changed. “After the hazing, I became completely out of control. Drugs, booze, women…ANY form of escapism. Anything I could do so I wouldn’t feel like that scared little boy laying on the bathroom floor in puke and piss, having pictures taken of me.” His partying and drinking escalated to where it was a daily occurrence. Thoughts of suicide danced around in his head. He sank himself into a deep depression.

Enrolling himself into the University of Winnipeg didn’t help his cause either. Nobody knew who he was, his hockey reputation didn’t proceed him. He started hanging with a rough crowd and turned to cocaine. During one night out with his drug dealer, he experienced an event that most people in the world never will. The cold steel of a 9mm on the temple of his head.

In one bar fight he got himself into (there was more than a few), saw him break a guy’s orbital bone and fracture his nose. It was beginning to catch up with him. “I was picked up for an Assault Causing Bodily Harm charge,” Shields recalls a much more frightening time which became some what of a wake up call. “I managed to get a great lawyer who got me a conditional sentence which sent me to an anger management program. As long as I completed the program there would be no criminal record.”

This is where Shields life started to take a turn for the better. Through the anger management program, Shields was able to peel back the layers and identify where his anger came from and understand it. The root evidently came from the night of hazing. It hasn’t been all sunshine and roses since but with counseling Shields has been able to come to peace with what happened to him and realize it wasn’t his fault. “I’ve come to terms with what happened to me. I’ve also come to terms with where it took me.”

His love for hockey unraveled but he began to coach. After getting close with some of the young guys on the team, Shields decided he didn’t want to see them go through what he did. So he came public with his story. “I don’t want anyone to go through what I did. I knew that I had to come out with my story and show that it’s important to talk about this dark side of the game.” Upon doing that, he set up an email account to converse with players around the world who were going through or have gone through something similar.

Shields took advantage of his acceptance to University as well. He graduated with a degree in Conflict Resolution Studies, a program that he obviously holds dear to his heart. “We have to continue to change the culture (of hockey).” He’s right. Without stories like these, people will continue to put players in the game on a pedestal. Without stories like these, we’ll continue to think that players are happy-go-lucky people who have it all when in reality, that’s not the case. Shields also goes around and speaks to local schools about his tale, mental health and the horribleness of hazing.

Shields story of courage and strength saw him be nominated and accepted as a “Hero of Manitoba” award winner for 2014. “Our Heroes of Manitoba” showcase the provinces every day people doing extraordinary things. No doubt, Shields was thought of during nomination. “I am very grateful and humbled. I had no idea so many people, teammates and players had nominated me. I didn’t come out with my story to win an award. But hey, if it keeps the conversation going and I can be used as an example of “what not to be”, it is all worth it.”

“All I hope is that the junior community continues to address, be proactive and support players who are struggling in all aspects of the game, not just hazing.” He’s absolutely right. Too much is focused on the playing abilities of the players and not about how the game affects them physically and mentally. The shift in thinking can only help to create stronger players in the long run. “I think the OHL has made a great decision in establishing this new program dealing with the mental health aspect of the game.”

So what’s up for Carson Shields this hockey season? Not much. “I decided to take a step back from the game this year. I played, I scouted and I coached…feels good to just be a fan,” He’s not gone from the game entirely however. “I still keep the door wide open for any player to reach out. I am responsible to that.” He’s in the process of expanding his journal that he had during his hockey days and turning into a memoir entitled “The Beauty”.

Carson Shields is a person who, in the short time we’ve chatted and gotten to know each other, I look up to as a symbol of strength and courage. Take the time to follow him on twitter and send him a tweet of respect. You can find him @CarsonShields23.

Feel free to follow me on Twitter: @MarchHockey and like the page on Facebook: http://www.facebook.com/marchhockey and send me a message! If you know any player who’d be willing to add their story to the “Dark Side of Hockey” series, send them my way!

2 thoughts on “The Beauty: Carson Shields and his Dark Side of Hockey”