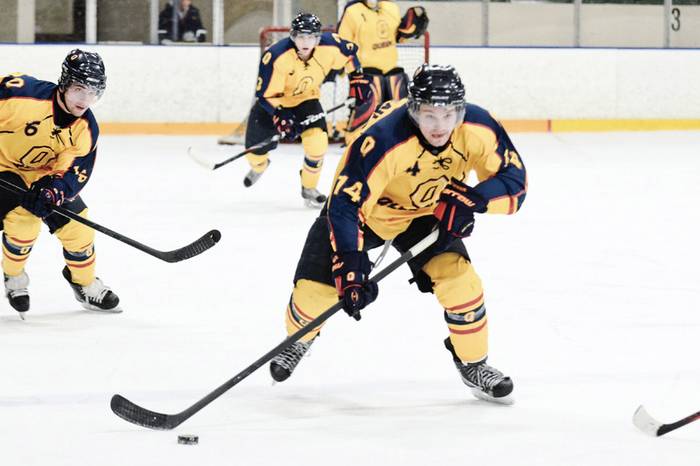 With another Ontario University Athletics hockey season back for another  year, the Golden Gaels of Queen’s University will look towards the veteran presence of former major junior players to lead the team to victory.

Former Peterborough Pete and 2014 OHL Champion Guelph Storm defenceman, Steven Trojanovic, spent last season with the Huskies of St. Mary’s University out in Halifax, Nova Scotia. The 22 year old for Burlington, Ontario put up impressive numbers in the Ontario Hockey League and should have been drafted into the NHL. (Overlooked with a +/- of +42?!) That being said, the NHL’s loss is now Queen’s University’s’ gain. A tower of 6’2 on the blue line combined with his ability to produce in needed games is a fantastic addition to the Gaels.

Two men from the east coast chose Queen’s as the educational destination that provided the most for the student-athlete. Former Mississauga Steelheads goaltender and a native of Halifax, Nova Scotia, Jacob Brennan looks to make the most of both his academic and hockey career. Enrolled in engineering, Brennan was the starting goaltender for four years with the Acadie-Bathurst Titan in the Quebec Major Junior Hockey League.  Just down the highway with the Moncton Wildcats, forward Shawn Bourdeau will trade his hometown of Kentville, Nova Scotia for Kingston, Ontario.

Absolutely no stranger to the city of Kingston is Slater Doggett. The 6’0 forward called Kingston home for two years in his OHL career as he suited up for the Frontenacs. His last OHL season saw him go almost a point a game with the Windsor Spitfires. After a minor attempt at pro hockey with the Alaska Aces in the East Coast Hockey League, Doggett saw himself falling back in love with Kingston for both his academic and university athletic career and will be a welcome home of sorts when he returns to the ice. As an added bonus, Doggett has been invited to the Chicago Blackhawks’ rookie camp.

Queen’s will start off the 2015-2016 season down the road on October 9th as they take on the Royal Military College Palladins.