For the first time in 18 years, the Trenton Golden Hawks are back in the Ontario Junior Hockey League finals. After what seemed like an easy four game sweep of the Kingston Voyageurs in the North East Conference finals, the Hawks begin their Buckland Cup championship journey in the next few days. 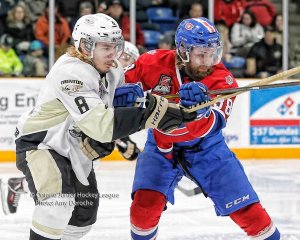 It’s been a season to remember for Trenton as they’ve had little trouble compiling wins throughout the season. Ending it with a record of 44-6-1-(3), the Hawks ran the whole way as league leaders. Players such as Danny Hanlon, Mitch Emerson and Hunter Fargey contributed on a pretty much nightly basis to keep the gold and black machine rolling. The goaltending greatness of Daniel Urbani kept the door closed to the opposition with little trickling through. Injuries were played through; giving the impression that this was Trenton’s time.

“You don’t play for a championship too often.” – Jerome Dupont

Coach Jerome Dupont, (or JD to those around him), demands a high level of execution when it comes to his players. He wants to win with the Trenton Golden Hawks and he wants to win now. A former National Hockey League defenseman with the Chicago Blackhawks and Toronto Maple Leafs, Dupont is used to having winning ways as a coach in the OJHL. Upon his arrival four years ago, he turned his Trenton team from last place dust collectors to a first place powerhouse. His guidance is what propels these Hawks players to the next level. It’s their time.

The 2016 playoffs have been a somewhat easy road for the Trenton Golden Hawks. The first round saw them roll past the Newmarket Hurricanes. Then came the Battle of Quinte as the Hawks were victorious against the Wellington Dukes. A final sweep of the Kingston Voyageurs keeps them at the head of the OJHL pack, salivating at the mouth for a taste of the Buckland Cup. “We have something special and it’s only going to get better from here,” said Hawks forward Kevin Lavoie, “I’m proud of every single person on this team. We believe we can do it and we truly feel that this is our time.”

A Buckland Cup win will send the Hawks to the Dudley Hewitt Cup out in Kirkland Lake, Ontario. If they’re successful, they’ll make the hard road out west to the national championship, the Royal Bank Cup. There’s no reason not to believe these great young group of kids can’t go all the way.

Because it’s their time.

An exciting three day tournament is being held in the city of Cornwall, Ontario that is sure to showcase the best of Junior A hockey this side of the Manitoba border. The Eastern Canada All Star Challenge is set to take place November 16-18 at the Benson Centre.

Returning to it’s founding league of the CCHL, the Challenge is slated to have numerous NCAA and NHL scouts in attendance to watch the nine teams battle it out. The CCHL will supply two teams, Team Yzerman and Team Robinson with Cornwall Colts bench boss Ian MacInnis headmanning the latter. The Nothern Ontario Hockey League will send one along with the Quebec and Maritime Junior Hockey Leagues.

The Ontario Junior Hockey League based in and around Toronto will send four squads to Cornwall, a total of 80 players with 20 of those committed to Division 1 NCAA schools.

The round robin begins on Monday the 16th with the QJHL taking on OJHL Team Coffey at 6pm. For more info, head on over to www.centraljuniorhockeyleague.ca

The complete rosters are as follows:

Since I’ve finally been able to put a few Ontario Junior Hockey League games underneath my belt, it’s time to give praise where it’s due. The most recent game I’ve had a chance to catch was last Friday’s tilt between the Trenton Golden Hawks and Newmarket Hurricanes.

Despite the injury bug taking a bite out of the Hawks towards the end of the  game,  they still managed to fire shot after shot towards Hurricanes netminder, Connor Ryckman. I happened to notice that if there’s one thing the Golden Hawks do extremely well, it’s get out of their own end in a flash. No matter what the rush, at times it feels like there’s no point in back-checking for their opponents and if you can’t catch up your last line of defence is your goaltending.

And what a treat it was to watch Ryckman.

I come from years of watching the CCHL and that league does not hold a candle in terms of skill level to the OJHL. It was a bit of an eye opener for me to see the bar set high by goaltenders in this league.  Ryckman, a former Barrie Colts draft pick, turned away an impressive 32 of 34 shots but what stood out the most was his aggressiveness to cut down the angle on any quick Trenton rush. As the game went through two overtimes to only end in a 2-2 tie, the goals Ryckman gave up were out of his control. This did not rattle him at all.

That’s not to take away from his goalie opposition on Friday night. Daniel Urbani who, when he’s hot, he’s smoking, currently leads the OJHL with a 929% save percentage and 1.62 goals against average. A far cry from what I’m used to in the CCHL. He picked up Goaltender of the Month honours and was also instrumental in eliminating Trenton during last season’s playoffs when he was a member of the Kingston Voyageurs. It’ll be interesting to see how deep of a playoff push he can help make with the Hawks.

One of the biggest differences in the OJHL compared to it’s Eastern Ontario counterpart is the players actually want to play physical. They attempt body checks whether they land them or not. They are not afraid to get dirty and get into the corners. That is what helps get people in the doors and spend money on your team. Of course, for Trenton, it helps when your team is currently 3rd in the country too.

Goaltending in the OJHL is a step above and is great for fans of the position. The development of every position however, keeps the OJHL remaining the “League of Choice” for many NCAA prospects. 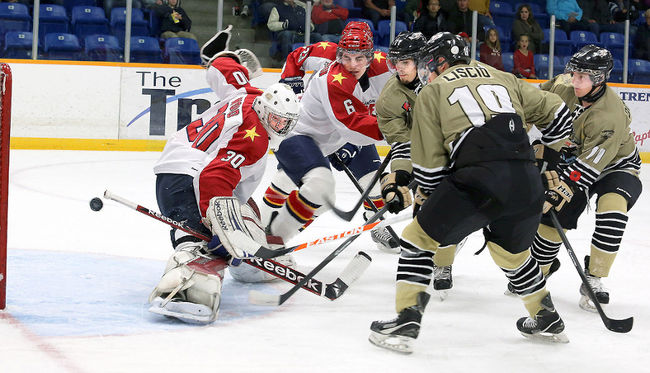 After a phenomenal pre-season showing that saw the Golden Hawks skate to wins against the CCHL’s Brockville Braves and last year’s number two ranked squad, the Carleton Place Canadiens,  Trenton was heading into the home opener with bulldozing momentum.

The first installment of the Battle of Quinte West saw the Hawks glide to an 8-2 victory over rivals Wellington Dukes. The line of Lucas Brown, Kevin Lavoie and Liam Morgan led to knocking in a combined 6 goals and 10 assists. Impressed with the boys start, Coach Jerome DuPont stated that it was this line (and I’ll dub it, the MLB line) that was the deciding factor for Trenton in the game.

“The line of Lucas Brown, Kevin Lavoie (2G, 3A) and Liam Morgan (6A) were a force and led the team to victory tonight” said Coach Dupont

A native a Powassan, Ontario, Lucas Brown spent last season with the Eastern Hockey League’s New York Bobcats. Also an alumni of the Rocky Mountain Roughriders AAA program in Colorado, Brown sat second in point totals for New York come years end. Brown is one player that teams in the rest of the OJHL need to keep an eye. The quickness of his feet along with his quick release is a talent Trenton can rely on.

Out of St. Catherine’s, Ontario, comes over-ager Kevin Lavoie. The 5’10 centreman had a remarkable season for Trenton shining in the both the regular and playoffs. A hardworking two-way forward, Lavoie was offered a full ride scholarship to Robert Morris University near Pittsburgh. After this season he’ll join former Carleton Place Canadiens captain, Elie Ghantous with a spot on the Colonels. The brass from his former GOJHL team, the Thorold Blackhawks had nothing but the best compliments to give him.

“He’s a dynamite kid,” former Thorold owner and director of hockey operations Dave Marrone said. “He was always the hardest working guy on the ice. He’s tenacious and he’s a key-situation guy, especially defensively. His backcheck was harder than his forecheck and he played a relatively physical style as well.”

17 year old Whitby native, Liam Morgan caps the end of the MLB line. After an explosive season with the Whitby Wildcats Minor Midget AAA, (40 points in 32 games), Morgan came to the Golden Hawks looking to make a name for himself. After one game, it looks like that reputation is coming. Morgan was drafted by the Barrie Colts in the Ontario Hockey League but chose to attempt to turn some heads in the NCAA. With 4 assists already bagged in and if he keeps up this play, there is no doubt a Division 1 school will come knocking.

The MLB line and the rest of the Trenton Golden Hawks will take the short trip down the 401 to Kingston where they will face the Canadiens on September 10th. Another test to challenge the squad in their young season. The Invista Centre should be rocking when the puck drops at 7:00pm.