A lot of people have been asking me why I haven’t commented on the Alex Penner fiasco that took place a couple weeks ago at the Ed Lumley Arena and commenting that I should be sticking up for my team, the Cornwall River Kings.

Sticking up for my team is one thing, agreeing with Alex Penner’s actions and not my team’s fans is another.

Look, even though this is the LNAH, a line needs to be drawn. I have no problem with what Alex Penner did. Yeah okay, his past events indicate he’s not one to back down from a fight be it how small but when somebody throws a damn can at your head (and makes you bleed no less), fan or not, you have a right to be pissed and retaliate.

These players are there for you enjoyment. They are there for your entertainment. Hell, some nights they beat each other to a bloody pulp just so you and your buddies can have something fun to do on a Saturday night. I have no problem with chirping and getting involved but when you start to get aggressive, it’s time to cut you off and say goodnight.

I don’t care what Penner did to provoke it, which I don’t even know if he did. If you watch the video (youtube it, I’m too lazy to link it), the fan comes running out of nowhere to launch the can as Penner skates off the ice. Like him or not, he’s a hockey player. He’s on the ice getting paid, you’re not and probably never will be.

Cell Block E can get rowdy and I think that’s fantastic. For the most part and the handful of games I’ve been too, I enjoy their heckling and commentary. I think some of the other teams find it amusing too. I know this guy might not have even been sitting in that section either.

Cornwall, you want to put a stop to this? Get some decent security who doesn’t just stand there. Tell them to not interfere with the chirping, only when things start to escalate. There’s no harm in a little heckling, hell this is hockey and the LNAH. If you do interfere, you’re only going to make it worse for yourselves. 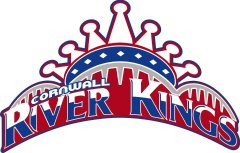 After a few first regular season games on the road, the Cornwall River Kings finally returned to their own barn Saturday night. In front of a crowd 2,453, all the hard work put into the last 6 weeks to keep the team in Cornwall finally started paying off.

Although, not in the way they had hoped.

The Marquis de Jonquiere showed just why they are the defending champions. A tough, fast and physical team, the Marquis came away with a 5-2 win. Francis Charette was the best player on the ice for both teams. His hockey sense is something to be in awe of, scoring 2 of the 5 goals on the night. Former River Kings back up Frederic Piche picked up the win.

However, the River Kings held their own and showed that they can hang with the big boys.

Remember, the Cornwall River Kings have only been together a few weeks and really need a chance to gel. Which no doubt, will happen with time. After coming off a loss the night before in St. Georges, Alex Bourret played an amazing fast-paced and physical game; notched the first goal for the Kings on a beauty shorthanded breakaway and earned himself second star of the game.

Another show of dedication came from Brennan Barker as he stood up to Gaby Roch who threw an elbow to the head to one of the River Kings. Although Barker seemed to take the punches, there is no denying the strength of sticking up for your teammate.

Heavyweights Francis Lessard and Chris Clouthier also dropped the mitts in a few fisticuffs. With time the River Kings will not be pushed around in their barn. Once the players start to get used of one another on the ice, hell folks, it’s nothing but up from here. Bow down to the Kings.

Next home game is Sunday, October 3rd when big Jon “Nasty”Mirasty and Sorel come to town. Puck drop is 3p.m. You won’t want to miss this one.

According to a facebook fan page that is being run by the Marquis de Jonquiere, the Cornwall River Kings have apparently solved their goaltending issue by dealing Frederic Piche.

Translated, this status says that Frederic Piche and a 4th round pick are being sent to Jonquiere in exchange for Bobby Mazerolle, Ahmed Mahfouz and a 10th round pick.

Bobby Mazerolle is a 26 year old Latvian who had plenty of success in the QMJHL suiting up for the Moncton Wildcats and Gatineau Olympiques before making the move to the LNAH. He has spent the past 6 years in the LNAH with the last two with the Marquis. His points have dwindled in recent years but maybe a change of scenery is all he needs. 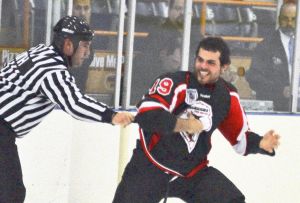 Ahmed Mahfouz needs no introduction to Cornwall fans as he won an FHL championship with the Akwesasne Warriors back in 2011. A CCHL alumni of the Nepean Raiders, Mahfouz spent last year in Dayton, Ohio with the Dayton Demons of the FHL. Notching an astonishing 111 points in 46 games player, this will be a welcoming addition to the Cornwall River Kings lineup.

Of course, this is all speculation as it is on a fan page and it would only mean dealing the LNAH rights of the players. Will update when I have a more official confirmation.

Up next as we take a look at the 2013 LNAH draft is the reigning league champs, Les Marquis De Jonquiere. (Say that 10 times fast.)

With the last pick in the first round, Jonquiere picked up a goaltender in Travis Fullerton. (What’s with all the goalies being drafted?!) Fullerton spent the past 5 years with the University of New Brunswick Varsity Reds but also spent time in the “Q” with the Lewiston MAINEiancs and the Saint John Sea Dogs.  In the 2010-2011 season, he was in the crease for 20 games and scored up 5 shutouts.

With the second pick, Jonquiere selected a player that needs no introduction to the fans in Cornwall. Ahmed Mahfouz is an agitating right winger who spent the past 3 seasons in the Federal Hockey League; 2 of them with the Akwesasne Warriors. With the Dayton Demonz last season, he somehow racked up an astonishing 111 points in 46 games!!! (Where was that in Akwesasne. Huh.)

Another player of note that is now Marquis property is Alex Penner. A towering 6’4 enforcer, Penner has spent his playing career among various leagues including the English Elite league, AHL and CHL, wining a championship last year for Mike Modano’s Allen Americans. And if you don’t believe me well….

Looks like the Marquis is trying for back to back championships. It’ll be interesting to see how this season plays out.