Each year, a select few hockey players get their names etched into the prestigious Hockey Hall of Fame. Naturally there are also a select few who seem to get snubbed; sometimes year after year. Usually, it’s when it’s too late that they get thrown in. The inductee does not get to witness the fruits of being inducted into the Hall as they are sadly no longer with us.

This drives me nuts to no end. Why wait until they pass away to do tributes or induct them in after the fact? Do these things while they’re alive so they can bask in their accomplishments.

Two of the players I’m writing about in this article are both very worthy to reach the Hall. One just finished up his career so it’ll take a bit of time before he gets thrown in BUT, I bet he’ll make it before a certain black and orange pedigree.

Maybe it’s because Bobby Clarke is on the selection committee and sort of has it in for him. We all know they don’t get along. However, back in 2007 in an interview with CBC, Clarke said by all means that Lindros deserves a place in there. And he does.

This is where the selection committee needs to throw all the politics and drama aside and just focus on the hockey. The stats and the facts for Eric Lindros are plain as day. Who cares that his family made him refuse to play in the Soo, or that he refused to play for the Nordiques. It’s been almost 30 years (!?); time to grow a pair.

There’s no mistaken the dominance that was displayed by the Big E in the later half of the 90’s. He carried the Philadelphia Flyers to the Stanley Cup finals in 1998 and got ever so close to Lord Stanley. He managed 70 points in a 46 game lockout season in 1995 which garnered him the Hart Trophy. He knew how to throw his big body around to his advantage but yet still kept small with his skill. It was a new breed of hockey player that was built for the time; you hardly see guys like him anymore.

But you know what? Look back at his career before he even hit the NHL. The man was a beast; he was tearing up every league he played in. He played a bit of junior down in Detroit where he had 52 points and 123 PIMs in 14 games.

You want to know how bad Philadelphia wanted this kid? This is what the Quebec Nordiques got in return for trading Lindros to Philadelphia: “Traded to Philadelphia by Quebec for Peter Forsberg, Steve Duchesne, Kerry Huffman, Mike Ricci, Ron Hextall, Chris Simon, Philadelphia’s 1st round choices in 1993 (Jocelyn Thibault) and 1994 (Nolan Baumgartner) Entry Drafts, and $15,000,000.”

This kid was good and he made the Flyers a contender about five or six years in a row. Who knows what kind of player he could’ve morphed into if it wasn’t for the injuries and concussions. That kind of label stuck after Scott Stevens threw his shoulder into him on the blue line during the playoffs in 1999. I remember sitting on my couch, watching it as a 12 year old and saying to myself “He’s done.” Lindros never played out a full season either which is shocking when you look at his point totals.

There is no doubt in my mind that Lindros will be in the Hall of Fame. It’s just a question of when. 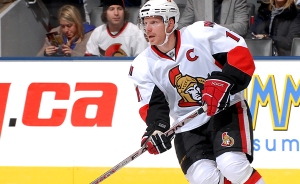 Which brings me to Daniel Alfredsson.

Aside from Alfredsson’s  two most known moments, (the hit on Darcy Tucker and the stick throwing incident) nobody can really name off what Alfredsson has done in his career. The guy carried an entire team on his back for almost two decades yet nobody seems to care.

Instead of rhyming off reasons why Daniel Alfredsson is pretty damn amazing, I’m going to let Steve Dangle tackle this in a video he did for Sportsnet a couple weeks back.

So with all that in mind, it begs the question. Does Daniel Alfredsson belong in the Hockey Hall of Fame?

Whether you like it or not, you have to admit it.

Who goes into the Hall of Fame first? Well, naturally in the order of things Eric Lindros would get the nod but we’ve been saying this for years and he’s yet to capture his rightful place. Alfredsson is going to have to wait his three years before he’s eligible to be nominated and with the way things are going, hell, we could see them on the same ballot!

In the end of all this, both men deserve their shot. Their contributions to the game of hockey, not only NHL but internationally as well surpass many. The Flyers and the Senators might each win Cups before this happens though.

What do you think?