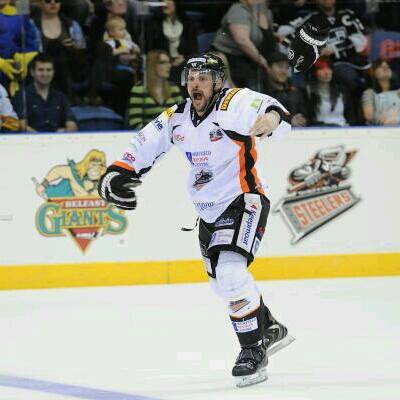 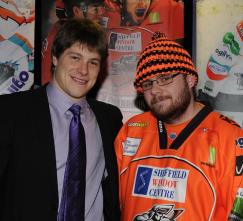 Recently Liam McCausland of the unofficial Sheffield Steelers fan blog, Frozen Steel, and I had an interesting back and forth chat on everybody’s favourite subject. You can find my responses during the first part of our conversation on his blog here. The second part of our chat is as follows. Have a gander into the mind of Liam’s hockey filled brain.

March Hockey: Well let’s start with how you got into hockey.

Liam McCausland: Pre-teen insomnia. Around the age of 11/12, I barely ever slept, and Channel 5 (one of the basic channels we get free over here) showed a live NHL game once a week. I could never keep up with the puck but I loved what I saw. When it stopped showing it I kind of forgot about the game, but I started seeing a girl at university in 2008 who was a season ticket holder at the Steelers. She took me to an away game in Newcastle and I was hooked again.

MH: That was my second question, why the Steelers?

LM: Yeah, her influence. We stopped seeing each other but stayed in the same circles so I kept going to games. I don’t think I’ve been to more than 10 games in one season if that, but its under my skin and such a big part of my life now.

MH: What do you think the Steelers need to do in order to repeat this year’s success?

LM: That’s pretty tricky, because up until the end of February we were talking about the team not being good enough. Enter Gerad Adams and we win the playoffs! I think we had the core of a good side that needed focussing and liberating. If we could keep most of that team together that would be half the battle. replace some offence we have lost in Lacroix and potentially Legue. A bit more team toughness too maybe. Oh, and a backup that the coach trusts, so Frank Doyle can have a rest.

MH:  Tricky question, what improvements do you think Team GB need to make?

LM: Oh god, so much. More time together pre-tournament would go a long way, a week together beforehand doesn’t seem enough. There’s calls for lowering the import limit, but then if the GB players aren’t up to task it might lead to a decline in attendances that owners wouldn’t go for. I’d say some investment from those able would go a long way, but Sport England don’t invest in things that don’t guarantee them medals either. I’d quite like to see a British Quota. Say so many of the team have to be british, say 1 nettie, 3 D, 5 forwards. make that a minimum. I’d started writing an article on it but I rambled for that long it sounded like a rant.

MH: What would you do or change to promote the EIHL better?

LM: To promote the EIHL? I’d actually start actually promoting it. Unless you’re a fan of a team, or live in a town with a team, or have premier sports, its fairly unlikely you’d know about the league. I live about 75 minutes drive from Hull, until I watched the Steelers I never knew they had a rink, never mind a team. The ideal would be mainstream coverage, but thats a while off yet I’d imagine. TV adverts would be my best solution. Quick 30 second sting, plug it to best effect, see what happens. A more general awareness would be superb – again, if I hadn’t met that girl at Uni I’d be stuck watching the Flames fail to make the playoffs year after year.

MH: What’s your take on what’s happening in Hull?

LM: Hmm. I was of the thinking that there’s two sides to every story until I got what I just received from Tom, who I’ve dealt with before and found to be a top gentleman. I don’t really know what to make of it – I think it needs looking into at a league level though and a thorough investigation conducted.

MH: How do you think the Steelers will react on the ice with the loss of the Legue?

LM: I think that all depends on Gerad’s recruitment. With the new rules do you go get one ‘New Legue” who puts up as many points, or do you go get 2 who could put up the same between each other? I think off-ice will be more hit than on ice – he was comfortably the longest-serving import and a fairly talismanic figure – as the “For Jeff” movement showed during the playoffs. Having said that, I think he’s easier to replace now than he was two years ago.

MH: Obviously the rule change is a huge topic. What do you think would happen if every team adopted Braehead’s strategy?

LM: I think there’d be a lot less of a negative reaction to it. The idea of a farm system sits well with me  but you have to applaud any effort to develop the stars of tomorrow. Braehead are a brand new club – well 4 years old – they didn’t form out of another club or move up from a different league, that is their team, so they’ve got no historical ties to other sides. They’re trying to make ties, and good on them. I’ve long been impressed with how Braehead do business though. They have the right people there.

Special thanks to Liam for this chat. Check out Frozen Steel at http://www.frozensteelblog.blogspot.uk