March’s note: Once again, I have the honour of writing a piece and donating it to the fine people of Bleed and Blue, the Coventry Blaze’s fanzine. I took on a hotly debated topic with ease. Check out http://www.bleedandblue.co.uk 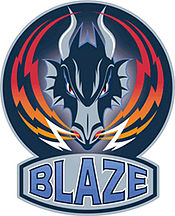 The topic given for this article and your reading pleasure is who should be the coach of the Coventry Blaze and why. Good question.

When Matty Soderstrom took over the helm at the beginning of the season, no one knew what to expect. That being said, everyone had their expectations way too high for a first year coach. Things were going to go wrong, that was inevitable but to sink that quickly? Well, pretty sure nobody expected that.

The Blaze started off this year’s campaign with a good feeling. Somewhere along the line things changed. I wasn’t a fly in the wall in the dressing room, hell I’m far away from the damn country, but it doesn’t take the average hockey fan to realize that the players did not want to play for him. They seemed slow and sluggish. I’d even go on the edge and say that it looked like they weren’t even trying at times.

Of course, management didn’t see this (or maybe they did and turned a blind eye), until it was way too late in the season to salvage it. Canning Soderstrom and bringing in Marc Lefevbre as a rental for hire coach from Sheffield was not the answer to stop the bleeding. However, this happened and there’s no point crying about it now.

Marc Lefevbre’s head coaching ability and experience come from the Federal Hockey League over here in North America. You think the LNAH runs things to the ground? Try the FHL. The FHL is as bush league as it gets. Don’t get me wrong, there are very talented players playing there (including Lefevbre), but let’s face it: Rob Ford could probably run that league better and that’s saying something.

Is he the right person to lead the Blaze in the upcoming season? If it were me, no.

Who else are you going to bring in? Honestly? There’s not much out there. In fairness to Lefevbre, he did seem to light a fire under the Blaze for a bit of time. Let’s face it, the Coventry Blaze are not a championship level team at this point in time. Yeah they used to be but it’s time to stop living in the past and deal with what’s in front of you. Give Lefevbre the benefit of the doubt and give him the time to build up his experience and get the players to trust in his ability to lead. There’s no doubt in my mind that Lefevbre has the leadership and passion. Believe in your coaching staff by giving him a full season. Don’t can him with a minimal amount of games left.

You can’t teach an old dog new tricks though. What I mean by that is, the Blaze need to start working as god forbid, a TEAM. There’s no camaraderie. There’s no teamwork. Nothing gels. It seems that everyone is on the ice and out for themselves. Do they believe in each other? Do they trust each other on and off the ice? Hardly and you can clearly see it.

Want a winning season? Promise Lefevbre or whoever is going to be your coach, the chance to coach a full season without worrying about the axe coming down. Start doing team building exercises during practice. Yeah, it sounds effing hilarious to do this with grown men but hell, something’s got to give. As for the injury bug that plague the Blaze all season long, sometimes that’s just how the cards fall and there’s not much you can do about it.

This roster has to implode and make some changes to keep everyone happy for the 2014/2015. Everyone’s a critic, that’ll always be there, but if you want to keep the flame of the Blaze alive; trust in your team.