The brand new AHL affiliate of the Vancouver Canucks, the Utica Comets, are starting to have their roster take shape. 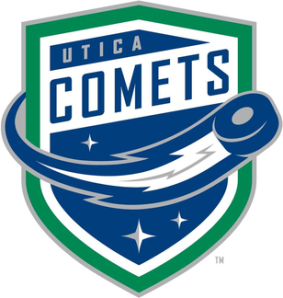 The President of the team, former NHL goaltender Robert Esche, announced last week that they had signed right winger David Pacan. Pacan spent last season with the San Antonio Rampage and the ECHL’s Cincinnati Cyclones. Pacan notched 52 points in 57 games with the Cyclones. A native of Ottawa, Ontario, and a CJHL alumni, I’m sure he’s glad to be a bit closer to home this season.

Another impressive signing saw 2011 Memorial Cup champion goaltender, Mathieu Corbeil climb aboard. As a member of the Saint John Sea Dogs, Corbeil lead the way to a QMJHL championship in 2012. Corbeil spent last year in the Central Hockey League with the Missouri Mavericks.

On defence the Comets picked up John Negrin. Negrin spent last season between the Lake Erie Monsters and Chicago Wolves. Negrin has spent time with 4 AHL teams and has played in 3 NHL games with the Calgary Flames. He brings plenty of experience to this newly formed club. Another notable defenceman signed to the 2013-2014 is former London Knight, Sascha Guimond.

The Utica Comets franchise was formerly the affiliate for the St. Louis Blues in the form of the Peoria Rivermen. Former NHLer Travis Green is set to head man the team for the upcoming season. The Comets will be playing out of the North Division which feature Canadian teams, the Toronto Marlies and Hamilton Bulldogs. The Lake Erie Monsters and Rochester Americans round out the strong division.

The full American Hockey League schedule will be available sometime in August. Hockey season is just around the corner.