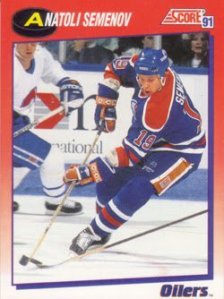 Does this name take you back? It should. Anatoli Semenov was a powerhouse in the 80’s over in Russia suiting up for Moscow Dynamo and playing second fiddle to the KLM line. By 1989 however, he was headed overseas and his career went downhill fast.

Drafted 120th overall by the Edmonton Oilers, Semenov spent 11 years in the NHL and I bet you wouldn’t even have noticed if I had not brought up his name. His career took him to the aforementioned Oilers, Anaheim, Philadelphia, Vancouver, Tampa Bay, and Buffalo. In 11 years, he only played 362 games. You do the math.

In those 362 games, he only managed to rack up 194 points. Once again, IN 11 YEARS. One thing I’ll mention though and I remember it vividly, he was killer on the video game NHLPA 93. At least he has that.