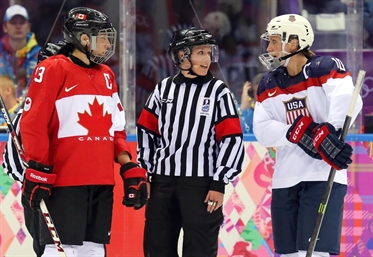 Joy Tottman is a well-known name among British hockey circles. She’s been apart of Ice Hockey UK as well as the IIHF for over 15 years. What’s even better is she is a strong woman at the top of her game. The past Olympics in Sochi, Russia was her third consecutive time officiating the Winter Games and she held the honour of being selected to run the ice for the women’s gold medal game between Canada and the United States. I caught up with her to shed a little insight into what makes a strong woman referee and to give women here in Canada a chance at stepping into another part of the best sport on Earth.

March Hockey: How did you get involved in hockey? What made you head into the disciplinary part of the game?

Joy Tottman: I first started refereeing at the age of 12.  I had wanted to learn how to skate and my dad had taken me to our local rink and given me the choice of playing hockey or figure skating and I chose hockey.  I was playing under 10s and when we had games no officials were turning up.  My dad was one of the only parents who could skate and so he took the referee course so that we could play our games.  He would then have to stay on to referee the games after my game and so he got me to take the course too so I could stay on with him.  I started to enjoy the refereeing and made the switch to just refereeing at a really young age.  I guess it was a way for me to be involved in the game without the physical element of playing in a boy’s team.

MH: This past Olympics was your third. How do you prepare mentally and physically for an event of that size?

JT: The physical preparation was a huge part of going to the Sochi Olympics.  There was a pre-Olympic selection camp in August 2013 where we were tested on and off the ice.  I had a trainer for off-ice who I saw 3 times a week and then did my own programme on the other days.  Because I have a day job this meant training at 6am each morning.  The mental preparation for me was all about getting game experience throughout the season and of course over the years.  Making sure that I focused on each game and learned from the situations within it.  It was about putting myself mentally in a place where I knew I was prepared and had done everything possible to be in the best shape and best frame of mind for the games. END_OF_DOCUMENT_TOKEN_TO_BE_REPLACED