The past few months seem to have been a trying time for the Philadelphia Flyers hockey club. One of their biggest decisions was the axing of their Ice Girls skating crew. You know, the girls who don scantily clad outfits and help scrap/shovel the ice in the middle of commercial breaks. (Or maybe they attempt to pump up the crowd. I don’t know, I haven’t really paid all that much attention to them until recently. *shrugs*) During the past couple of exhibition games, a new ice crew made up of men that came to fruition was met with a chorus of boos from the male-dominated fans in the arena.

Just like any other business would, the Flyers catered to their customers and with one loud “You asked! We’ve listened!” announcement, the Ice Girls were back and tryouts are being held in the next couple of weeks.

Now here’s where it gets stupid and why I’m torn between being for them or against them.

Personally, I kind of hold them in the same breath as cheerleaders. I realize some teams do cheer but most just clean the ice and get the crowd pumped. Obviously these Ice Girls are just here to entertain and enthrall the male masses. You also have a pretty strong case for their use of objectifying women. I wholeheartedly agree with both statements. You mean to tell me that in the “internet age”, men can’t go three hours without staring at a half-naked young women? The internet equals countless boobs my friend.

There’s also how these women are being treated. Wearing next to nothing in freezing arenas, not being able to wear jackets when they man the doors, not being able to be in the vicinity of ANY player at ANY time whether on the clock or not (it’s not the players prerogative to get up and leave, it’s the girl’s apparently) and much more are just some of the stupid things these girls have to deal with. They also get paid next to nothing. A great article goes into detail about what some of these girls go through and you can read it here.

However, there’s two sides to every story.

In a way, these girls are the embodiment of female empowerment. I’ve read great articles with some of the girls who thoroughly enjoy doing this. It makes them feel good and it makes them feel proud. Both of those things are hard to come by for a woman in this day and age. Sure, they might wear very little clothing but it’s done in a tasteful way. It’s not tacky or slutty. (On the ice that is. You could argue the fact the Ice Girls do sexy calendars. Well guess what, some teams have their players pose and print their own sexy calenders. That’s right, MALE players. And on another note for minor league teams, sold calendars means revenue for the club.)

I would also wager money on this. 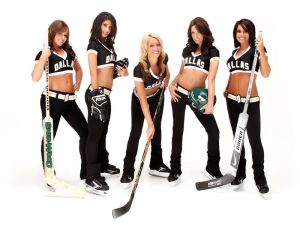 I would put money on the fact of if these “fair-weathered feminists” had the body, the moves, the hair, and had the chance to become an Ice Girl and grab the attention that comes with it, they would. No doubt in my mind. (Notice how I say “fair-weathered”, you know the ones I’m talking about.)

If you step back and look at how the Ice Girl is practically just a sub-category of cheerleading, the Ice-Girl really doesn’t come across as such a bad thing. Hell, cheer-leading is a national sport now too. If people want to spin it around and throw a “sex” label on them then well, that’s their problem.

In conclusion, I see both sides of this argument and I agree with both sides. I guess I’m just kind of neutral on the whole subject. Both sides of the coin make really good arguements.

Like I said, I don’t really pay all that much attention to them.

I just know I’d never be able to skate and shovel at the same time. Way too clumsy for that mess.