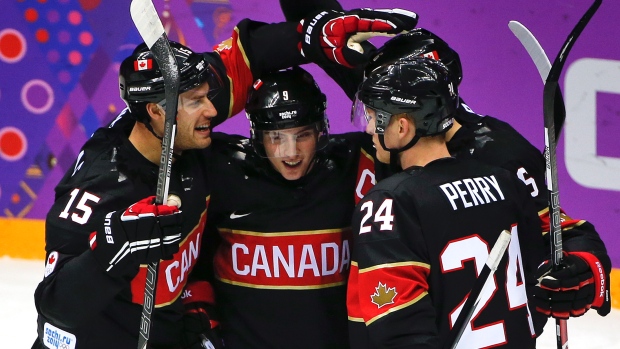 In honour of Canada Day, I’ve decided to throw together a little list of my top five Team Canada showings. In my “rankings” I consider the roster, the era of when the team played and how well they did. Remember, this is just my opinion and it will probably defer a lot from most. I won’t be naming the Summit Series either because everyone knows about that one. So sit back, grab your Timmie’s or Molson, eat some poutine and read about some of my country’s greatest teams.

I know, I’m starting off with one that everybody knows about but I have to mention it. The only thing better than winning gold on Russian soil, is winning it at home. However, the 2014 squad proves that they were miles ahead of the Vancouver 2010 victory. Dominating their last two games against the US and Sweden, Team Canada (“senior” team, not junior) hasn’t shown this much power since the early 90’s.

A younger, faster Team Canada emerged. The changing of the old guard is indeed in play as players like Jamie Benn, Matt Duchene, John Tavares, Alex Pietrangelo, showed the world why we have the best developmental system going. Sweden didn’t hold a flame to how we played in the gold medal game. If you thought this team was scary; if the NHL will allow players to participate, just wait until the 2018 Olympics in Pyeongchang, South Korea.

The forerunner to the World Cup in the 90’s and early 2000’s, the Canada Cup was an exhibition tournament that took place before the NHL regular season. The NHL didn’t allow its players into the Olympics yet so this was one of the ways where the best hockey countries could compete for the title of World’s best. Players from the USSR weren’t allowed to play in North America just yet either and the Canada Cup was used as a way to see how the Russians were building their skill. Canada went undefeated to take the gold.

Some even put the Canada/USSR match-ups in this tournament ahead of the 1972 Summit Series as the best exhibition hockey ever seen. Want to know why? Just read off this lineup for Team Canada:

On paper, that line up is golden before the first skate blade hits the ice. I’m all for fairness though and giving credit where credit is due, case in point; the Russians lineup was insane as well. I’ll name off some of the more familiar names: Sergei Makarov, Vyacheslav Fetisov, Valeri Kamensky, Igor Larionov, Sergei Nemchinov, and Anatoli Semenov. The Soviets only lost one game. Guess to who.

By the way, this is was the only time Wayne Gretzky and Mario Lemieux played on the same line together. Hell, the winning goal was scored by Lemieux from Gretzky. I’ve watched highlights of the games and how they dominated the ice is just unbelievable. It’s something that I personally think we’ll never see again.

In the late 90’s, women’s hockey was just starting to get its push and the recognition it deserved. It wasn’t anywhere near being a global sport as both the US and Canada were the top two teams year after year. The only difference from present day is that other countries are quickly gaining speed and getting stronger. Back then, well, poor old Sweden was in for it.
The 1998 Winter Olympics in Nagano, Japan were the first to include women’s hockey as an Olympic sport. I remember it like it was yesterday. I was in grade five and almost all of my school work was done around the Olympics. (In fact, my teacher decided to have her fun and give me a complete project on Russia. From beginning of time until present. Jokes on her, she gave me 100%) Actually, you know what’s funny? Russia never qualified for the tournament. JAPAN AND CHINA DID.

Anyway, Canada, the US and to a lesser extent Finland, dominated the pool. Most games finished in shutouts with box scores set in the double digits. (Also, Canada almost a gave up a close one to China, finishing 2-0. Seems like we always do this every single Olympics. See: Belarus 2002, Latvia 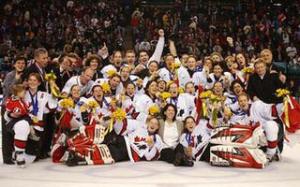 2014) Everyone knew who would be in the final. It was just playing the waiting game until then. Low and behold, the Red, White and Blue became victorious, shocking the world.

Looking for revenge the women of Team Canada stepped up their game a notch. Maybe with the luck of planting a loonie at center ice underneath the surface, they were out for blood. Canada was undefeated in their pool and managed 26 goals for against the likes of Sweden, Russia and Kazakhstan. There was only one team with a better record: USA.

In front of almost 10,000 die hard Team USA faithful, the red and white notched three bangers to seal the deal. Caroline Ouellette, Hayley Wickenheiser and Jayna Hefford were three names that Canada will never forget. They haven’t let up since either.

If you don’t know me by now, you’ll know that I have a keen love of enforcers and fighting in hockey; I’m all for it when there’s legitimate cause. If you know your hockey, you’ll also know that this team didn’t even medal or place. They got thrown out of the tournament. So why am I including it? Well, this tournament is the one that started our nation’s love of the junior tournament.

The 1987 World Juniors took place in Pietsany, Czechoslovakia and with international politics at the time in the midst of a nuclear meltdown with the Cold War, it’s safe to say that North America and the USSR didn’t really like each other. Especially on the ice.

When these two teams met, the Russians were already out of medal contention. Canada, on the other hand, had a really huge chance at a gold medal. If they scored more than four goals, victory was theirs. Naturally, there was tons of animosity in the air. Especially when after scoring the opening goal, Theo Fleury did his famous slide towards the Soviet bench and pointed his stick towards them like a machine gun, opening fire. That probably didn’t sit well.

Towards the end of the second period, Canada was up with a comfy 4-2 lead. However, after a fight, Soviet player Pavel Kostichkin two handed Fleury obviously retaliating for his previous actions. Well, all hell broke loose after that.

A line brawl went into motion with Evegeny Davydov the first to jump the bench. All bets were off now as both teams cleared the benches. Valdimir Konstantinov broke Greg Hagwood’s nose, Mike Keane dummied Valeri Zelepukin, Stephane Roy got pretty much jumped and yet nobody stopped it. The inexperience of the refs assigned to this game played a pretty big factor in this melee.

Then the refs left the rink. Beautiful. How do you stop two big, bad hockey countries from killing? Well, you shut the lights off! That’s how!

Anyway, the brawl was eventually simmered down and the game canceled. The IIHF threw out both teams and suspended them. We may have not won gold, but that event is the exact reason why Canadians care about junior hockey so much.

Okay. I’ll admit it on the internet. I was in the bathroom when Sidney Crosby scored the “golden” goal. That was the only part of the tournament I missed. Yes, I’m a horrible Canadian. That being said, I’ve never EVER seen a country come together like Canada did for that game, hell, for those Olympics. Everyone was beaming with pride at every moment.

That’s the reason it takes the top spot. Not because we won gold, not because of hockey but because of our love for Canada. The red and white. The true north strong and free. The patriotism this country had for those cold two weeks in February 2010 might not ever be felt again in my lifetime. Hell, I was on the other side of the country but you could still feel it. I hope every Canadian, and I mean every Canadian, where ever you are in the world, gets a chance to feel like I did that day. Proud of your country.