EDIT: Now they’re trying to back track. Come on guys, own up to it. P.S. I’m not “news” but thanks for the compliment.

You’ve got to be joking.

I’m trying really hard to like this team but every decision they make keeps turning me right off. We could talk about the coach, we could talk about signing a guy who’s highest level of hockey is Junior B, we could even talk about trying to sign a player that’s already been signed. I’ll refrain from those because they’re pretty much straight forward answers. Anybody who knows anything about hockey can come up with a smart opinion.

We could talk about the new logo.

Again, I won’t. While I don’t like it, I can get past it considering it’s not a logo that makes a club. It’s the players, wins, and championships that defines a team.

I’ve refrained from writing articles on each subject because quite frankly, I’m sick of being pessimistic about everything. However, every decision being made is keeping me that way.

Just when I think the team is starting to turn around, like being smart about giving Brennan Barker the captaincy this season, something stalls it.

This time is the Cornwall River Kings sad attempt at merchandise. 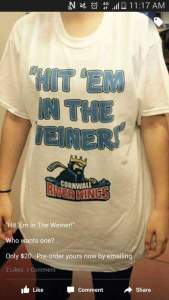 What, in the hockey god’s name is this?!?

I get it. The team is strapped for cash so you’re trying to drum up some money by making merchandise. That’s a smart move as it’s worked out for many a team before. But out of the thousands upon thousands of hockey slogans that are out there, you mean to tell me that “HIT ‘EM IN THE WEINER!” is the best you came up with?!

It doesn’t even make sense! (Even for LNAH standards.) Come on, give your head a shake. How are you supposed to even take this team seriously with the words “hit them in the weiner”? You want that to be the first piece of merchandise people in the hockey world will see? Anybody who knows even the slightest bit of marketing knows this is stupid. (Obviously there isn’t because we wouldn’t have had another logo change.)

The response on social media has been quite frankly, utter digust and confusion. The team is supposed to shine a new era and get rid of the shortcomings of years past.

I rest my case.

By the way. If you can’t take criticism; get out of the hockey rink.