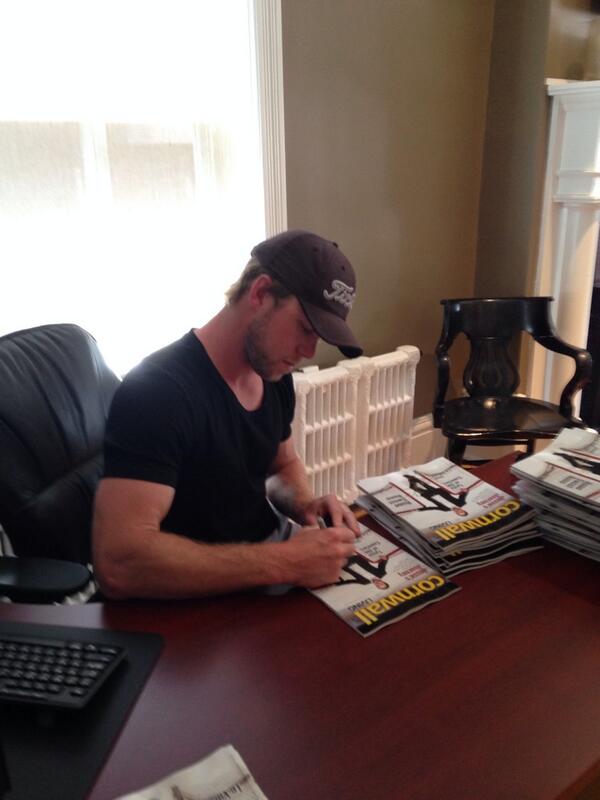 How fitting of the latest edition of Cornwall Living magazine to feature hometown NHLer Jesse Winchester as their cover boy. At a special event held last week at local restaurant Schnitzels’ European Flavours, Winchester himself was on hand along with a variety of local Cornwallites to witness the unveiling.

Cornwall Living showcases the citizens and their accomplishments throughout the region. Plenty of local photographers have their work featured in the magazine along with profiles of local business men and woman, athletes and creative minds. It is a fundamental part of promoting how one can thrive in Ontario’s eastern most city.

Winchester who joined the Florida Panthers last season after a few years with the close by Ottawa Senators, first started his hockey career in nearby Winchester suiting up for the Jr. B Hawks. From there he made the jump to the Junior A. Cornwall Colts for three seasons, ending with 82 points in 54 games in his last season as captain. After a successful collegiate career with Colgate University, Winchester made the big leagues as he joined the black, red and gold of Ottawa.

Winchester is a big role model for young Cornwall hockey players. His performance has not only lead him to the NHL but has led him overseas as he played last year’s lockout season with Jokerit Helsinki of the top league in Finland. He managed to secure himself the title of having the best faceoff percentage in the league.

Cornwall often gets a bad rap. It’s usually from the younger folk but as you grow more mature you realize that Cornwall is a great place to raise a family. It’s strategically placed close to Ottawa and Montreal who in itself provide many opportunities for Cornwallities as well. I was born and raised here. I’ve come to love this little city on the banks of the St. Lawrence River. Your life is what you make of it. Your city is what you make of it.

Even if you leave, chances are you’ll miss this Seaway City.