At one point growing up in Cornwall, it was the cool thing to do to gather up your 13 and 14 year old friends and head to the Si Miller arena on a Thursday night for a game of Cornwall Colts hockey. Most of my friends were there to socialize where I on the other hand actually paid attention to the game. Names like Derek Wagar, Tim Vokey, Ross McCain, Andrew Schembri and Matt Verdone are still enriched in my mind. Of course, Hugo Boisvert was no exception.

Boisvert stated his his junior career in Cornwall in the mid 90’s. From there he went on to star with the Ohio State Buckeyes, the team that is giving him the Hall of Fame honour. He lead the team in scoring in his last two seasons and earned himself a list of awards while being named to the CCHA All-Rookie Team in 1997, the All-CCHA First Team and the First Team All-American in 1998 and the All-CCHA First Team and Second Team All-American, making him the only two-time All-American in Ohio State history. Not bad for a kid from Quebec.

After turning pro with the Orlando Solar Bears of the then IHL, he turned over to the AHL and starred with the Grand Rapids Griffins for 3 years. Looking for a change Boisvert headed across the pond where he has since called Germany home. He suited up for the Kassel Huskies of the German Elite League for a few season before the team folded due to financial difficulties.

Boisvert now is a part of the Dresden Ice Lions and is still a dominating presence on the ice. Also apart of that same league is another former Colt, Andrew Schembri who is suited up for the Deggendorf Fire.

As a young kid from Quebec who started his hockey career in Cornwall and is now continuing his professional career, this is an astonishing recognition. Congratulations Hugo and all the best with Dresden this year! 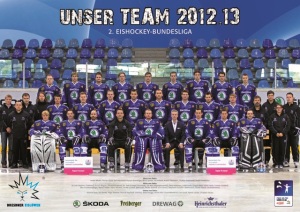