In the only series being played this weekend in the New Zealand Ice Hockey League,  the Southern Stampede travel down to Avondale to take on the West Auckland Admirals. 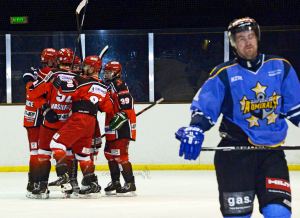 The Admirals are coming off of a 2 game loss (including a confrontation with the TKRT Tropthy) to the Canterbury Red Devils on their last weekend set in Christchurch. They will hope to be ready to play against the opposing Stamps. Nick Henderson will be looking to add to his team leading goals as he enters this weekend’s showdown.

The Southern Stampede however have not played since June 29th. On that date they fell to the Botany Swarm by a score of 10-6 in front of a hometown crowd. Will the time off prepare them for their clash with the Admirals or will it have turned into a disadvantage? Only time will tell. Matt Schneider who sits second in the league with goals scored and 4th in the league in points will try to add to his streak to sit on top. Mike McRae will also look to add to his point total to move up a notch with the league leaders.

The Stampede and Admirals both sit at the bottom of the standings in 4th and 5th place respectively. With that being said, don’t count out the Stampede. They’re very much still in the running as spots 1 through 3 are in a tight race. With two wins this weekend, the Stampede could very well see themselves tied for 3rd place.

Get down to the Paradice Avondale this weekend for some sure to be hard-hitting and talented hockey. Puck drops at 5pm local time.