The draft is finally over and everyone can finally sleep a little bit better at night. At least until Free Agency starts up. Let’s not get ahead of ourselves here though. We’re going to take a look at the top 5 picks who got selected in this years draft.

Of course to no one’s surprise MacKinnon went first overall. Joe Sakic and Patrick Roy had been saying for weeks that they weren’t going to draft defensemen Seth Jones. That led for lots of speculation of “will they” or “won’t they”. Well, as we can see they weren’t bluffing. Mackinnon was the first player from the QMJHL to be drafted first overall since Sidney Crosby in 2005. After putting up outstanding numbers with the Halifax Mooseheads and capturing a Memorial Cup championship title, MacKinnon will be a no brainer in training camp and should make the cut. See him on the first line with Landeskog and O’Reilly but no lower than the second where Matt Duchesne could offer great veteran support. 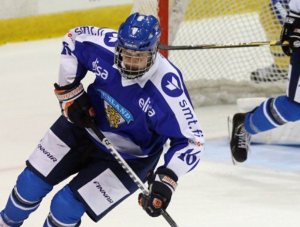 With the first shocker of the draft, the Florida Panthers also declined to pick up Seth Jones and went with Finnish-Russian powerhouse Alexander Barkov. Coming out of SM-Liga with Tappara in Finland, Barkov collected 48 points in 53 games. A massive man at 6’2, Barkov shows a great amount of hockey sense and should add depth to the Panthers squad.

As expected, Steve Yzerman and company selected MacKinnon’s Halifax teammate Jonathan Drouin. Fast feet and good hands, Drouin is a great pick to fill in the void that was left with Vincent Lecavalier’s buyout. Drouin seems to know what’s going on around him on the ice at all times. He was an integral part of Halifax’s Memorial Cup win.

What a steal for the Nashville Predators! American defencemen Seth Jones was choosen 4th overall and could not have gone to a better team. Imagine him and Shea Weber on your blue line. This year with Portland, Jones racked up 56 points in the 61 games he played. Should be interesting to see how his career first starts out.

A jack of all trades, Lindholm is a great addition for the Hurricanes and the Stall brothers. A stick handler with lots of leadership skills in him, Lindholm could go a long way in the Carolina system. Providing he doesn’t head back to Europe, he’s a rising star on the east coast.

If I were the Colorado Avalanche, this would be my first pick.

Nathan MacKinnon, who calls Cole Harbour, Nova Scotia home has been compared by some to be the next Sidney Crosby and not because he’s from the same town. MacKinnon, a strong 17 year old power forward is excepted to go at least in the top 3 in the 2013 NHL entry draft.

Coming off of a Memorial Cup win and named MVP of the tournament, the stars could not be more aligned for him right now. Selected first overall by the Baie-Comeau Drakkar in the QMJHL and not being able to speak french, MacKinnon was then traded to the Halifax Mooseheads who he would help head man the team into glory. In his 2 seasons with the Mooseheads, MacKinnon has played a total of 102 games. His goals and assists for both years combine for an astonishing 153 points.

With Patrick Roy and Joe Sakic both  making remarks about not drafting Seth Jones first overall, I have no doubt in my mind MacKinnon is the one they want.