Nathan Pollard is a fiesty defenceman who’s been playing with the Peterborough Phantoms of the EPIHL for the past 3 years. At 20 years old, he’s a definite force on solid player on the team.

March Hockey: Growing up, what player was the biggest influence on your style of play and why?

Nathan Pollard: There isn’t really any players that I based my style of play on, because when I was younger like everybody else your favourite player most of the time would either be the big goalscorer or the fighter! However 2 coaches have helped my progress as a player throughout my hockey career which are Jon Kynaston and Stevie Johnson. These guys have coached me since I started playing at the age of 9 and still now, Jon is teaching me ways to better my game every time I step on the ice.

MH: What was it like to be a part of the U18 championship?

NP: It was a good experience for the team and for me as a player, we didn’t play as well as we had first hoped. But we had a great team that year and played well all season to get there.

MH: Where would you like to see your hockey career go from here?

NP: I haven’t really thought about it to much, having just turned 20 I still (hopefully) have many years of playing ahead of me, so I’m just taking every season as it comes! I’d love to become a Peterborough legend and get my shirt on the wall with the other greats that have played in Peterborough colours! However it would be a dream to play in the EIHL or another top European league.

MH: Is there a lot of support for the Peterborough Phantoms? 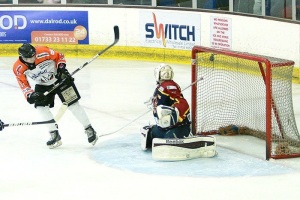 NP: The fans in Peterborough are great, other teams hate coming to our rink, but anybody who plays for Peterborough love playing at home because the fans really get behind the team. The local football/soccer team get an average attendance of 8000 people, but an average crowd for our game is only about 600, so it would be great to get more fans! But obviously ice hockey isn’t as popular as football is in Peterborough.

MH: If you could play with any player past or present, who would it be and why?

NP: I’d love to play with Pavel Datsyuk! I could stand by the net and he’d somehow get me a goal! It’d also be pretty cool playing on a team with my two brothers in the future! However my youngest brother has just turned 6 so it may be a while before that could happen!

MH: How did you get into hockey and how has your career gone so far?

NP: My twin brother started when he was 5, but I used to go and watch and wasnt interested in playing until I was 9, but once I got started I was hooked and have loved it ever since! My hockey career has only just started really. I progressed through the junior teams until eventually making my first appearance for the phantoms when I was 16, I have played for them ever since! For the coming 2013/2014 season I have signed on a two way with a team called London raiders. Which means I will be splitting my time between the raiders and the phantoms to improve my game and gain more experience by playing for a different team in a different league!

One thought on “One on One with Peterborough Phantoms’ Nathan Pollard”